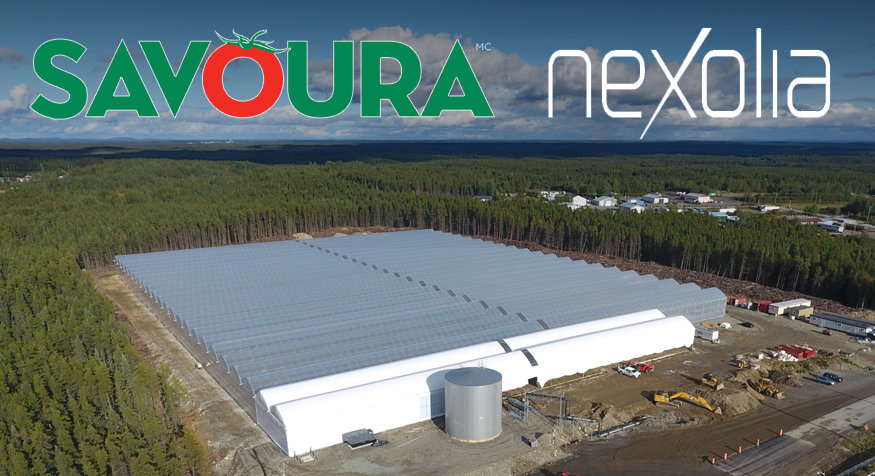 Mirabel, September 14, 2020—Richard Dorval, President of the SAGAMI/SAVOURA/SAVOURA BIO group, as well as the Nexolia’s President Vicky Lavoie, are proud to announce a partnership agreement that will lead to the production of 1,800 tones of tomatoes/year with the help of the greenhouse company, Les Serres Bleues Inc., located in Chapais. The tomatoes will be marketed under the famous brand SAVOURA by Les Serres Sagami Inc. Thus, three hectares of conventional growth were built in Chapais this summer, so the greenhouses will enter into production over the next few days and the first Nordic tomatoes are planned to be on the market for this coming December.

The greenhouse complex will be heated from a biomass-enhancing cogeneration plant that will produce the steam needed to heat the greenhouses. An innovative concept that will allow the implementation of a circular economy principle valuing all the energy produced on the site.

This agreement corresponds in every way to SAVOURA’s sustainable and responsible development objectives. “We couldn’t have found a better production partner at this stage to meet our customers’ expectations. The intrinsic values we share in terms of development, respect for the environment, product quality and the well-being of our employees have enabled us to reach a fair and promising agreement for the future of both companies. In addition, we are responding favourably to the recent call of Quebec’s Prime Minister, François Legault, regarding the Government’s desire to double Quebec’s greenhouse production within a few years in order to achieve our societal goals of food self-sufficiency” As for Vicky Lavoie, she says she is more than proud of the industrial symbiosis that the project will generate in Chapais. “This business model, which we are developing in Northern Quebec with the cooperation of the municipality, represents a real revolution in terms of energy development and the development of several resources we possess. The agreement with SAVOURA, a brand with strong values shared by my team and I, is the perfect vehicle to highlight a whole range of innovative and structuring projects on which we are working.” The dynamic entrepreneur thus concluded the announcement of this important news from an economic point of view.

Les Serres Sagami Inc. markets different varieties of tomatoes for Quebec, Canada and North America. It has been growing and marketing organic tomatoes since 2011. These tomatoes are available today under the Brand Savoura BIO. Since 2012, the company has made numerous acquisitions to expand its production, the largest, concluded in April 2015, is the acquisition of the Serres du Saint-Laurent facilities, and the famous Savoura brand. Since December 2017, it has been marketing strawberries produced in Danville, Estrie, and, since autumn 2018, organic mini cucumbers in Saguenay. The company now operates a total of 32 hectares at nine production sites throughout Quebec and directs its new investments with a sustainable development perspective.