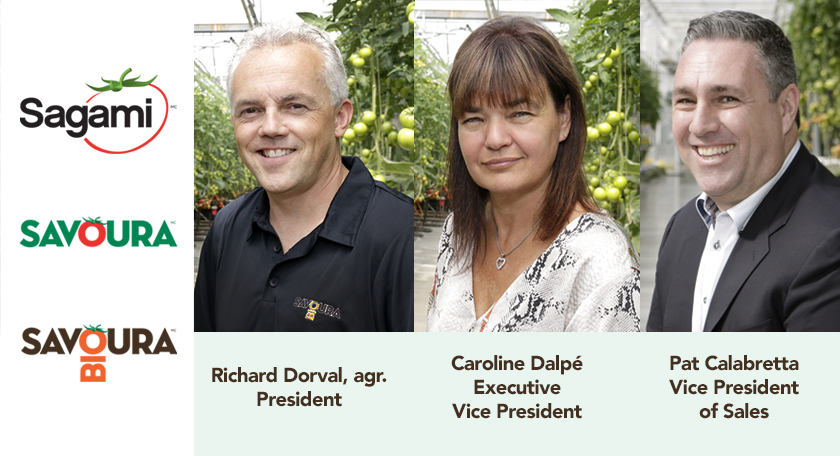 Mirabel, May 1st, 2020 – The President of the « Les Serres Sagami Inc. » board of directors, Peggie Clermont, is pleased to announce that three new shareholders who will hold strategic positions within the SAGAMI / SAVOURA / SAVOURA BIO group,are assuming the succession of Stéphane Roy, who tragically lost his life, including the death of his son, Justin, last summer. Also, Richard Dorval, Agr., assumes Presidency of the group, Caroline Dalpé will become the Executive Vice President and Pat Calabretta, the Vice President of Sales.

« First off, I would like to thank all of our teams and our employees, without whom this joyous outcome would not have been possible.  Since last July, in spite of the trying events, we have stayed the course, maintained this united rhythm in terms of project development and demonstrated operational efficiency. I congratulate everyone from the bottom of the heart!

In my opinion, the arrival of Richard Dorval, Caroline Dalpé and Pat Calabretta within this new trio of managers, is both stimulating and comforting for our staff and the many projects which we currently have on the table. For nearly 25 years, Richard has been a key element in developing greenhouse growing expertise in Québec. Initially at SAVOURA, where he began his career and thereafter, in 2013 with the SAGAMI team, where he infused original ideas and creativity. His determination in developing innovative team projects will be undoubtedly contagious now that he holds the role of President. As for Caroline, her knowledge of our organization’s finite details and her interpersonal qualities as manager, will be important aspects for the successful completion of current and future projects. With Pat’s arrival as Vice President of Sales, it represents a major asset for our current successful team. His vast renowned experience of distribution networks, his implication within the industry’s various organizations, in addition to his knowledge of the players involved and North American fruit and vegetable markets, will contribute to the positioning of our greenhouse-grown products and the notoriety of our brands. »

With today’s announcement, Ms. Clermont said that she was more ready than ever to offer an innovative vision to the markets while meeting their expectations. Moreover, she said she would rise to the challenge of the growing consensus within Quebec’s society regarding the importance of greenhouse production as a solution to Quebec’s food self-sufficiency. Recent declarations at a press conference by Premier, François Legault, seem to clearly demonstrate the collective interest of developing this industry in Quebec.

Les Serres Sagami Inc. provides different varieties of tomatoes for the Quebec, Canadian and North American markets. They have been cultivating and marketing organic tomatoes since 2011. These tomatoes are now offered under the Savoura Bio brand. Since 2012, the company has made many acquisitions to further develop their production, most recently being the largest, concluded in April 2015, with the acquisition of the Serres du Saint-Laurentfacilities and the renowned Savoura brand. They have been marketing the strawberries produced on their Danville site in Estrie since December 2017, and mini organic cucumbers, since the fall of 2018 in Saguenay. The company currently operates a total of 32 hectares at nine sites across Quebec and focuses their new investments on a sustainable development perspective.