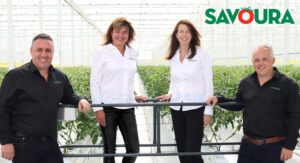 A larger team and thousands of projects in mind

For Peggie Clermont, who has been involved for over 10 years as a strategic advisor to the largest greenhouse company in Quebec, the time had come to join the team. “The understanding I have gained over the past 10 years of the many challenges in this industry allows me to undertake this role with humility, but also with great enthusiasm. The quality of the team I am joining today is a privilege, I am more than convinced that each small step we will take together will allow us to achieve structuring projects of which we will be proud. It is also a unique opportunity for me to contribute to this ambition of implementing tools that can promote food autonomy in Quebec, a value that I share, as do my new colleagues,” concluded Ms. Clermont at the time of the announcement.

For Richard Dorval, Agr., the arrival of Peggie Clermont, in the context of the company’s development and effervescence within the industry, is good news as well as a lever to carry out all the projects on the table. “Caroline, Pat and I wish her a warm welcome to SAVOURA,” said Richard Dorval enthusiastically.

The SAVOURA Group commercializes different varieties of tomatoes for the Quebec, Canadian and North American markets. The company has been growing and marketing organic tomatoes since 2011. These tomatoes are now offered under the SAVOURA BIO brand. Since 2012, the company has made numerous acquisitions to develop its production and expertise. Since December 2017, it has been commercializing strawberries produced in Danville in the Estrie and since fall 2018, organic mini cucumbers in Saguenay. The company has just completed the construction of 4 hectares of greenhouse in Mirabel for the production of tomatoes in conventional culture. This $20 million investment will allow the company to cultivate more than 31 hectares on 11 production sites throughout Quebec. All planned investments, as well as new packaging projects are oriented towards a sustainable development perspective.