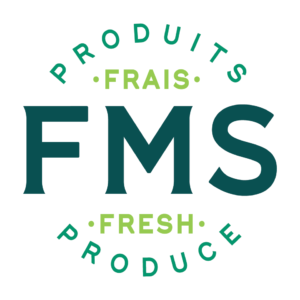 Sherrington, May 15, 2020 – Starting this summer, FMS Fresh Produce will provide its customers with an expanded range of organic vegetables thanks to a new partnership signed with Quebec’s biggest organic farm, Agri-Fusion. FMS Fresh Produce will manage the distribution of all Agri-Fusion’s fresh vegetable produce, while providing production support at the farm in Saint-Polycarpe. By expanding its product offering, FMS Fresh Produce is serving its customers in ever better ways by responding to growing consumer demand for fresh organic vegetables and sustainable practices in the agri-food sector.

With its strong distribution network, FMS Fresh Produce will be able to promote Agri-Fusion produce, showcasing the healthfulness of their organic, non-genetically modified produce with consumers. Thanks to the respected expertise of Agri-Fusion, and its cutting-edge approach focused on sustainable development, the distributor will have access to high-quality organic produce, which is excellent news for the customers of FMS Fresh Produce.

“Helping facilitate the marketing and distribution of vegetable farmers’ produce is the core of our vision. The production and distribution of organic vegetables are front and centre for the future of the agri-food industry. We had no hesitation in partnering with Agri-Fusion, which practices large-scale organic farming and has been led by a dynamic team for decades. We’re very happy about the deal,” says Marc-Olivier Daigneault, President and Director General of FMS Fresh Produce.

A leader in the production of field crops and organic vegetables in Canada, Agri-Fusion’s mission is to sow, cultivate and harvest the future of organic products and to contribute to the sustainable development and innovation of organic farming. Founded in 2000, the farm has been 100% organic since 2014. In a few short years, Agri-Fusion has become an important industry player, the largest organic farm in Quebec and one of the largest in Canada. They farm 7,400 acres of organic crops in western Montérégie and southeast Ontario. Sustainable development and social responsibility in the agri-food business are guiding principles at Agri-Fusion.

FMS Fresh Produce is an important network of Quebec growers who share pride in locally grown vegetables. With over 50 years of experience, every day FMS Fresh Produce builds on its expertise to provide each sector of the Canadian and American agri-food industry with locally grown produce that’s always fresh, healthy and delicious. The company has undergone remarkable growth since 2014 and is now positioned as one of the largest groups in the business. FMS Fresh Produce is part of Groupe FMS Daigneault, a holding company specialized in the fresh vegetable sector, which has its own farms while also partnering with numerous producers. In total, they work over 3,000 acres of land.