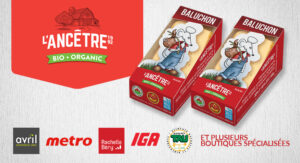 Now in a grocery store near you!

BÉCANCOUR, December 2, 2020 – Pascal Désilets, CEO of Fromagerie L’Ancêtre, was pleased to announce today that the renowned Baluchon cheese, a semi-firm paste with a washed rind, made entirely from organic milk, is back on the shelves of Quebec grocery stores and specialty shops. Following the integration of Fromagerie Le Baluchon by Fromagerie L’Ancêtre last August, the production of the cheese that has won numerous Quebec and Canadian awards, including Best Canadian Fine Cheese in 2014 as well as several CASEUS, resumed in September. From now on, the Baluchon is available in IGA and METRO supermarkets as well as in natural food grocery shops such as AVRIL SUPERMARCKET, MARCHÉ TAU and RACHELLE BÉRY. It will also be available in 2021 in PROVIGO and MAXI.

“This is a pivotal moment for L’Ancêtre in connection with its plan to diversify in the processing of organic milk. This opportunity for us to offer a wider choice of organic dairy products to Quebec and Canadian consumers represents an important step as well as a privileged positioning for our company. For nearly thirty years, we have been constantly innovating and the realization of this project spurs us on to continue along this sometimes difficult but so stimulating path. Long life to L’Ancêtre, to Le Baluchon and to those who are involved in the production and development of the organic dairy products sector.”  Thus, concluded Pascal Désilets in the context of this landmark announcement for the organic sector.

Since the company was founded, L’Ancêtre dairy products have distinguished themselves by their composition of top-quality ingredients and their unique taste. Originally born of the common desire of 10 dairy farmers to create organic products, L’Ancêtre has become not only the largest processor of organic butters and cheeses in the country, but also a Quebec flagship. It is present from coast to coast and through its mission and values, it offers consumers “every bite is a better world”. In 2019, the company updated the image of all its organic dairy products.